Resources and Historical Collections Office (Shiryo-shitsu), The Library of Economics 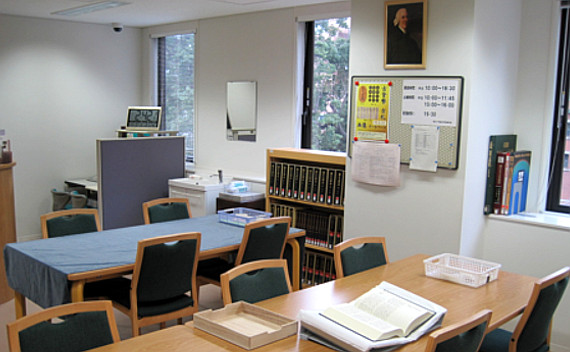 Resources and Historical Collections Office (Shiryo-shitsu), The Library of Economics

The Resources and Historical Collections Office (Shiryo-shitsu) originated as the Commercial Materials Library that was founded in the College of Law.  With a history that is almost a century long, it is now located in the 3rd floor of the Economics Resarch Annex (Kojima Hall) of the Graduate School of Economics. This building was constructed in 2009 on donations from Kojima Ryojiro, the Representative Director of the Kojima Group.  The donation was made “for the enhancement of the library”, and thus the building has many facilities which enable excellent preservation and management of rare primary sources of the Library of Economics at the University of Tokyo.  The Shiryo-shitsu was relocated to this building in February of 2010, and officially opened in April of that year.

The current Shiryo-shitsu was formed when, in April 2009, the Economic Documents Office and the Historical Documents of Economics of the Center for International Research on the Japanese Economy (CIRJE) were consolidated and made to be a part of the Library of Economics at the University of Tokyo.  The Director of the Shiryo-shitsu (a position concurrently held by the Director of the Library of Economics), oversees two sections – the Historical Documents Section and the Resources & Statistics Section.

The items in the Shiryo-shitsu range from primary resources such as corporate and labor-related materials, governmental materials, historical manuscripts, and classical documents associated with economics, to historic items such as coins.  Our role is to collect, organize and publicly display materials usually found in libraries, manuscript depositories and museums.  In order to pass down early modern and pre-current materials to our future generations, the Shiryo-shitsu is also working to advance historical and scientific research on classical materials as well as the study on material conservation.